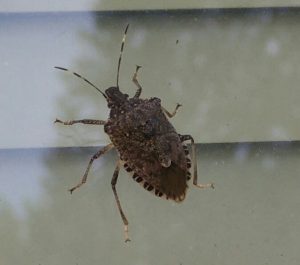 What do they look like and when do they become a nuisance?
There are several species of stink bugs but in Southeast Michigan, the calls we receive are almost always regarding the brown marmorated stink bug. These are seasonal pests that emerge from the trees and become a nuisance mainly in the fall when they look for places to over-winter, often resulting in a large number found on the exterior of the home. They are just shy of 3/4″ long (0.67 inches), similar in width and have a distinctive shield shape. Stink bugs are considered to be agricultural pests. They are not known to cause significant damage to the home and are considered to be a nuisance pest.

Due to the large number of these bugs on houses during the spring and fall, they are considered nuisance pests. They are especially problematic during the fall, when they sometimes invade houses and other man-made structures seeking warmth or a place to overwinter. They remain inactive inside the walls (and behind siding) while the weather is cool. Heating systems or a warming of the wall voids may revive these pests during the cold months. Some may falsely perceive it to be springtime and may enter inhabited parts of the building in search of food, water and other similar insect species. In the spring, the bugs leave their winter hibernation locations to feed and lay eggs on trees; a large number of these pests may be seen during this time and well into summer and early fall, depending on the temperature.